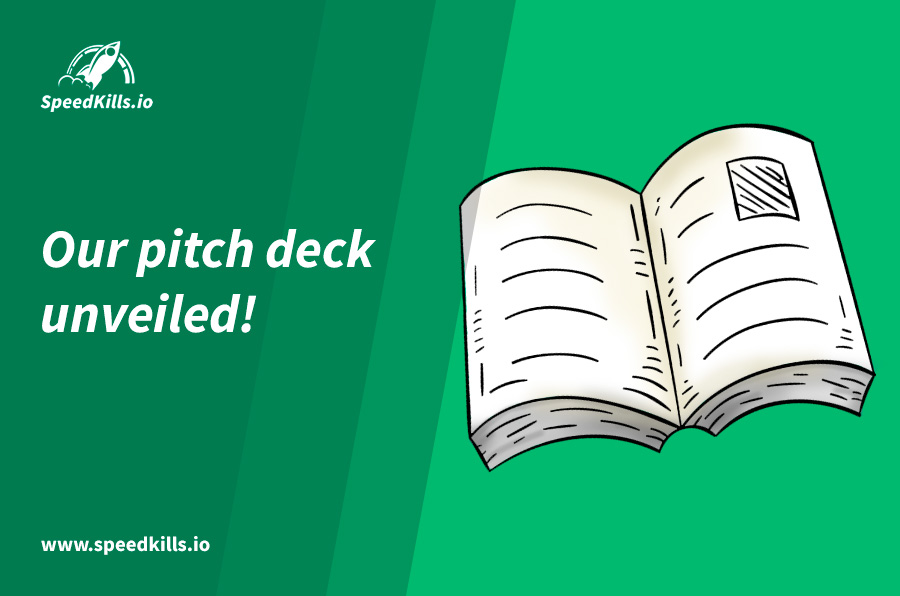 We started off optimistically.

The plan was to put together a sexy pitch deck, use it to seduce investors into funding our company and bada-bing, bada-boom — we’d have a $150k in no time.

I even had a nice template I could base my pitch deck on thanks to Dan Norris from Black Hops Brewing.

Slides 1 through 6 practically wrote themselves.

And then I hit the Revenue Projections slide…

But before I get to that, a more fundamental question must be answered:

Why would we - or any early stage startup for that matter - even want to take on investors in the first place?

To boostrap or not to bootstrap?

The main benefit of bootstrapping a company, purportedly, is that you don’t have to give up any equity.

However, this isn’t necessarily true.

In the case of SpeedKills.io, Lesly and I both work for a combination of cash and “pie”.

(“Pie” is the promise of future equity as calculated according to the equity distribution framework we use called Slicing Pie — the only truly fair equity splitting solution we know of.)

However, funding a company out of your own pocket - which is what we’ve been doing to date - does prove invaluable in other respects.

For one thing, it instills discipline.

As a nice bonus, if your business succeeds, you earn the coveted bragging rights of having “made it” all by yourself.

If we accept a cash injection we have to give up equity (pie in our case, since we don’t work on fixed equity splits at this stage in our growth.)

And some investors use their cash contributions as a means of exercising control over the direction of the company, which is something I’m wary of.

I consider myself the keeper of the vision that makes our company great.

But investors have their own visions.

Yet on the other hand, an investor with a solid entrepreneurial pedigree could prove to be an invaluable advisor and resource.

In any case, what could we hope to gain from a cash investment that would outweigh the potential negative consequences?

In the first place, and perhaps most critically, funding would enable me and Lesly to take modest salaries and go all-in with this business.

We’d be able to pause our consulting activities without stressing over money, thus allowing us to focus on SpeedKills.io 100%.

Second, an investment would allow us to move more quickly.

We’d be able to hire and grow without having to negotiate the delicate (and stressful) balancing act of paying team members out of pocket while trying to pay our bills at the same time.

I believe we’re on the cusp of a disruption in the hosting industry that will introduce high quality value-add services on top of powerful cloud hosting at reasonable prices as a standard offering.

People are sick of shitty hosting that leaves it up to you to manage everything yourself.

“Hosting as a service”, as our customer and brand champion Richard Patey calls it, is a game changer.

At the same time, we’re no smarter or harder-working than other entrepreneurs, and I believe I’m justified in my paranoia that somebody will come along and execute this idea before we really break onto the market if we move too slowly.

And nothing beats being first to market.

Our best defense against the inevitable horde of competitors that will mushroom up as we gain notoriety is to hustle our asses off with no distractions so that we’re not only first to market but best in class as well.

We’ve been in bootstrap mode with this and our previous businesses enough times, and we’re mature enough as businesspeople that we probably wouldn’t squander an investment.

All in all, the specter of blowing this amazing opportunity due to insufficient resources and too-slow implementation scares away any reservations we have about accepting outside moneys.

But back to the pitch deck.

So there I was working on our slides.

I had just hit the “projections” slide, and after staring at it for a while a lightbulb went off in my head.

I turned to my business partner Lesly, who was standing beside me at the coworking space where we were working, stared pregnantly at him, and said “shit”.

He raised an eyebrow and I proceeded to explain the source of my exclamation.

You see, up until that point we hadn’t done any number-crunching whatsoever.

We were operating on the assumption that the math would simply work itself out.

This is probably how most newbie entrepreneurs approach a new venture until hard numbers kick them in the nads and force them to evaluate the viability of their darling idea from an objective standpoint.

Investors would obviously tell us to take a hike if this was the extent of thought we’d given to our finances.

So I fired up a new Google spreadsheet and started tabulating.

And boy am I glad I did.

As it turns out, our current model would be unprofitable if Lesly and I took even the most modest of salaries.

Salary wise, we were only budgeting $3k per month each, which would afford us a decent but by no means extravagant lifestyle here in Thailand Colombia.

As a founder or partner I think you need a certain amount of peace of mind in terms of income in order to perform at your best, especially since the future of a startup is far from guaranteed.

If you fail, which is statistically likely - don’t sweat it.

Most entrepreneurs spend years trying all kinds of stuff before something really takes off.

We know that we’ve got a great idea, with multi-million dollar potential, and encouraging early traction.

A salary would simply ensure that we don’t have to live like paupers as we attempt to make the most of this opportunity.

In order to hit that number we’d need “only” 172 customers.

It’s an ambitious but not impossible goal, especially between 2 people, and especially if we’re not both stuck in operations.

The salary I projected for a full time WordPress dev was $1500 a month for a good Eastern European team member or even a talented local.

And to service 172 customers we’d need 6 developers because each dev should be able to handle about 25 customers.

Those tally up to about $30k per year.

There are also always miscellaneous and unplanned-for expenses like accountants, incorporation, legal fees, etc., so I set aside another $10k in costs.

Subtract $30k for hosting and that leaves us with $90k.

After we pay our WordPress devs the $108k they earned, it will put us $18k in the negative.

Tack on miscellaneous expenses at $10k and that puts us at -$28k.

And you want to know the scariest part of this numbers game?

I’m pretty sure my cost estimates were much too optimistic.

So I did the only sensible thing to do, I raised the prices in our projection model.

The profit margin at this price point is a little too thin for comfort, especially given the nature of most everything to always take way more time and cost way more money than you expect.

So I plugged $147 into the spreadsheet.

At this price point we’d end up with about $80k in profit per year, which would probably be closer to $40k in real life.

At $147 I know our product is still a tremendous value for a busy business owner, so I went and updated our pricing on the spot.

About a month after making these projections I re-evaluated our unit economics from a fresh perspective with the help of our contract developer Udit, who has startup experience and is just a sharp dude in general.

We simplified our offerings into 3 tiers, and replaced the $1500/month Eastern European developer with a $500/month Indian developer.

All of a sudden our numbers looked a lot better, and as of this week we’ll be bringing on our first full time developer from India!

Udit was instrumental in this process, particularly in helping to dispel my reluctance to hire in South Asia.

While we’d still be excited to take on a great investor, the prospect of bootstrapping now that we’ve nailed down our numbers is a lot less frightening.

Would we still take an investment?

But now we’re in a position of power where we don’t need the money.

And consequently, we could negotiate better terms if and when we deal with potential investors (the inclusion of an advisorship role would probably be something we’d push for).

The moral of the story is that creating a pitch deck - which essentially includes writing a convincing business plan and crunching your numbers - is an incredibly useful, and educational exercise which I endorse wholeheartedly!